Meet a Dad in Action 2

Meet a Dad in Action 2

Another interview with a Dad in Action. Remember to contact Jessica about the next event! 🙂

1. Programs you participate in the AHA:

The biggest would be annual meeting, then Camp HUG, and the Salsa Challenge and Walk

2. What are you most interested in gaining from Dads in Action?

3. What would you tell a dad who hasn’t attended an AHA event, but is considering it?

Well I hope that as a parent of a child with a bleeding disorder, they would look into all options and avenues to help cope with whatever problem they encounter and use all the tools that are available through the Association to hopefully find a solution or at least some type of answer. So with that I would strongly push them to attend at least the Annual Meeting because at least there they can find resources that can or maybe not give them the full answer but the right direction to go.

4. It’s a day off work for you, what would you be doing for fun?

Personally since I’m away so much spending time with everyone either watching a movie together just walking around the mall or someday if we can get Rylee to go camping we can add that to the list.

5. What is your favorite activity to do with the kids?

Same as question 4, basically whatever they want and we can afford it I’m for it.

6. What do you do to support your child with a bleeding disorder?

Tough question at least for me, I do try to be involved in everything I can, but a lot of times my work schedule just kills my efforts. It keeps we away from events such as doctor visits for functions related to the Association, so Christy will keep me updated on things and issues so I don’t fall behind so at least I’m aware. 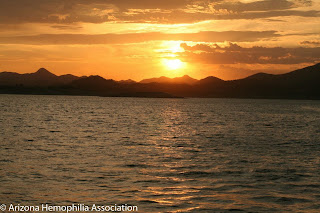 Just to add I think over the years we have seen the Association grow from its infant stages to where they are now and we hope to be around to see how great they become. Especially with the addition of different groups like BleedHERs for the moms and women with a bleeding disorder so they can break away for a short while, meet other women in the same issues and discuss with each other and find out they are not alone and they create a network and a bonding and new friendships.These things help in such a huge way some people can’t imagine. That’s why I’m glad to see the Brotherhood and Dads group starting up so that there is a foundation to where new dads who just found out about their child’s bleeding disorder can know they aren’t alone and these groups are some places you can meet and hang out, talk or just listen and hopefully find what one is looking for.
By Hemophilia Editor|September 25th, 2012|Categories: Dads in Action, Stories|0 Comments